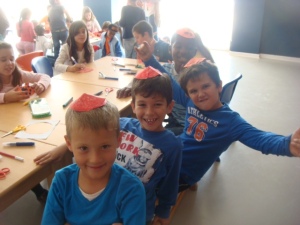 Last week around 100 primary school children of the Silves Sul School in Armação de Pera, took part in another series of The Brothers’ Grimm Fairy Tale Workshops. During the workshops the children were shown how to make red caps, based on the Little Red Riding Hood fairy tale.

A Special touring exhibition “Imagination of the Brothers’ Grimm” which had already been shown in Germany, Denmark, New Zealand and Australia, came to Portugal in March and the opening exhibition was at the Convento in Lagoa. This was to celebrate the bicentary of the publication in 1812 of the first edition of the classic Grimm Brothers’ “Children’s and Household Tales” well known in many countries and now available in over 100 translations. The Exhibition was curated by Gudrun Bartels, a founder member of the Gottinger Marchenland e. V. who had sponsored the exhibition coming to Portugal. This Association is involved in the research and history of fables and fairy tales. Local school children were invited, with their teachers, to visit and take part in   school workshops.

After Lagoa, the Exhibition moved to the Silves Sul School in Armação de Pera.