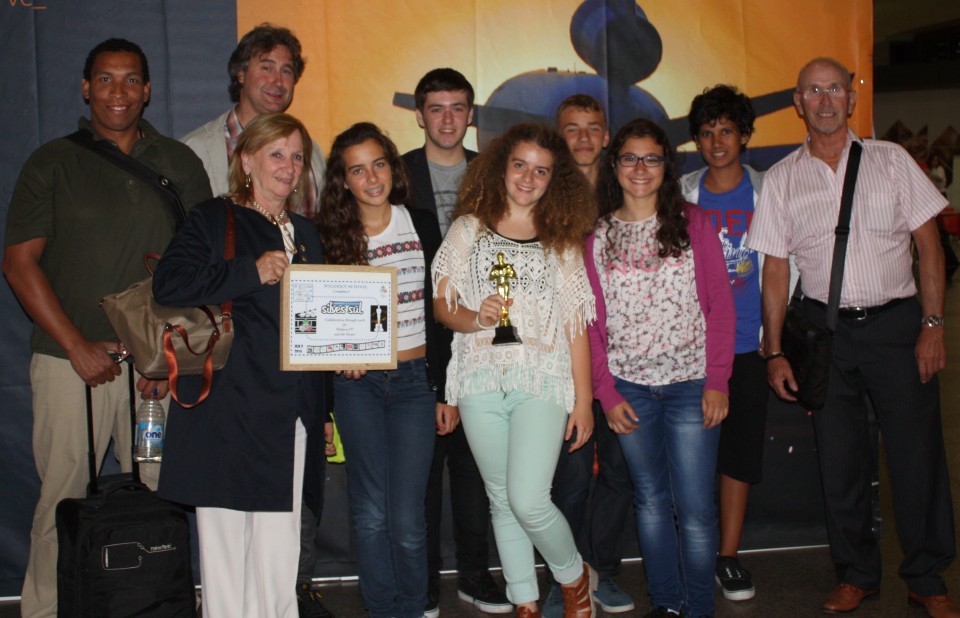 Staff and students from the Silves Sul Group of schools have now returned from their visit to Wildern School in Southampton.  6 students had entered their multi media work into the Wildern School Oscars as part of an exchange organised by the Silves Rotary Club.  Staff stayed with Rotarians in the Southampton area and students were hosted by the families of pupils at the Wildern School.  The movie about the emancipation of women submitted by Sarah Piña won the Best International Film category against very strong opposition from her fellow students.  Along with an Oscar Sara also won movie camera

Sara and her Oscar

Much to the surprise of the Algarve visitors another camera was warded to the school in recognition for their outstanding work.  This was received on behalf of the school br Dr Carlos Silva the principal of Escola Agrupamento Silves Sul.   Whilst students attended lessons along with their hosts, staff had a chance to share expertise with their UK counterparts.  Dr Carlos also spent a very useful 40 minutes with the head teacher at Wildern and an agreement was reached to have further cooperation between the two schools.

The visit was a success on many levels with the students making new friends and experiencing family life in the UK, and staff having an opportunity to look at different methods and approaches to teaching and learning.

All this would not have been possible without the support of all those who attended fundraising events organised by the Silves Rotary Club, the help of the Hedge End Rotary Club members in Southampton and the personal donation given by their Past President, Rosemary Hall.

By apwchina in Uncategorized on July 18, 2014.
← Off to the Oscars Caring for the Babies of Silves →
%d bloggers like this: