Presentation evening for the Cookery Competition 2014

The Guests of Honour, Students of Silves Sul and Almancil

The Silves Rotary Club joined with Almancil Rotary Club on the 2 April to celebrate the finalists for the jointly funded cookery competition between the Schools of Silves Sul and Almancil and to officially declare the winner. Guests were welcomed at the Conrad Hotel, Almancil to be served the winning menu but this time cooked by the chef’s of the Conrad Hotel themselves. The students and teachers of the schools were present to witness the delight with which the winning menu was received by Rotarians and their guests. The executive chef Andrew  Mc Gee was surprised by the desserts of both teams and served them in combination to perfection.

Throughout the month of March,  The judges spent 6 days tasting food prepared, cooked and served by the students of Almancil and Algoz schools. They have been treated to some interesting and delicious dishes. The grand final took place at the Conrad Hotel on the 24 March. The students were presented with a black box of ingredients and ask to cook and serve a three course meal. They mastered the high tech kitchen at the Conrad Hotel and Pedro’s team from Almancil produced prawns in garlic, filet steak with spinach, potatoes and caramelised onion followed by a chocolate mousse. Erica’s team from Algoz cooked prawns in a Marie Rose and brandy sauce, filet steak with spinach and parsnip pureé and an orange desert. The competition was very close but after much debate, Algoz School were declared the winners by a squeak.

The students received personalised aprons and certificates. The Silves Sul School was presented with the trophy which they will be able to display in school for the year, alongside a replica which they will be able to keep. The runners up Almancil School also received a crystal plaque to display in school.  Both teams have been offered works experience in the Conrad Hotel. 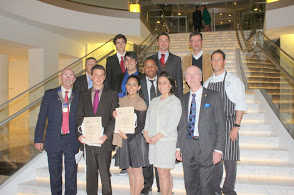 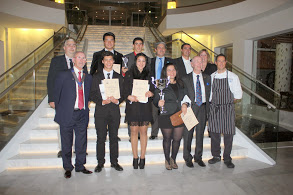 Next year it is hoped to offer the opportunity more schools  as part of both rotary clubs work in promoting educational opportunities for the students of the Algarve.

By apwchina in Uncategorized on April 6, 2014.
← Successful Exhibition of Brothers Grimm Fairy Tales 5 June Concert by Wind Quintet “Pasu” →
%d bloggers like this: