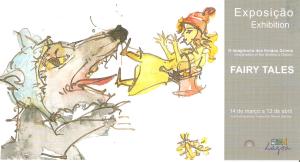 This Brothers’ Grimm Bicentary Exhibition ” Imagination of the Brothers’ Grimm showed a cross section of over 100 pictures, by different artists, covering a wide spectrum through the history of Fairy Tale illustrations over the last 200 years.  It was complemented by the paintings, murals, sculptures and mobiles produced by the students of Lagoa and Silves in workshops held in their schools.  It has already been shown in Germany, Denmark, Japan, New Zealand and Scotland. It was organised by German artist Gudrun Bartels and assisted by Rotarian David Trubshaw. The exhibition was supported by :

Some examples of the childrens work: 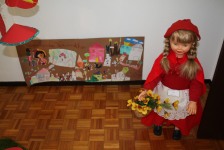 There will be a second chance to view the Exhibition when it moves to Armação de Pêra later this year. The closing ceremony was attended by Gudrun Bertels (centre) and Berhhard Reuter (President South Niedersachsen, Gottingen) with (l to r) Isabel Flores, David Trubshaw, Michael Bach (Hon German Consul) and Alan Winn, President of  Silves Rotary.